skip to main | skip to sidebar

By popular request! Well, one person requested it anyway.

Lasius niger and Lasius platythorax are undoubtedly hard to separate. This becomes particularly difficult when you find specimens that seem to be somewhere in between. However, it is always possible to assign them to one species or another, with a bit of work.

First of all, L. niger and L. platythorax are small dark brown Lasius with outstanding hairs on their antennal scapes. In the UK there are no other species that have these characteristics, though in Europe it gets a little more complicated1.

Some people seem to base identification of the workers of these species on one or two characteristics. However, experience has taught me that it is usually more reliable to use all of the following:
These are all shown in the photomontages. I have, on occasion, also felt the need to use the length of the setae on the underside of the head, but I can usually identify these species reliably without this and the setae are difficult to measure.

Probably the most useful character is the clypeal pubescence. Quite often this can be visually assessed, with practice, though on occasions an entire nest series will have moderate clypeal pubescence and have to be assessed morphometrically. To do this you use a measuring line, as shown below. Measure the length of this line in µm (l) and then count the number of hairs that intersect it (n). Seifert (2007) gives the average distance between the hairs (l/n) for L. niger as <16µm and for L. platythorax as >19µm. 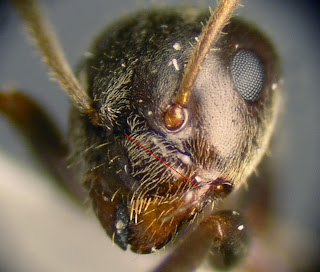 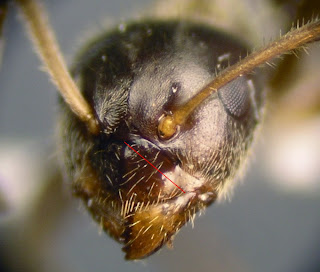 Whilst you're looking at the clypeus it's worth noting its shape in profile. Typically, L. niger has a rather curved clypeus, whilst in L. platythorax it is comparatively straight. The idea that they differ has been floating around in BWARS for a couple years now, though I must admit I'm one of the last to accept that this is probably a good character. I feel like I've now seen enough and have not been able to dispute it - plus Barry Bolton is apparently using it, so it must be good!

The two species have distinct ecological preferences. L. niger prefers drier habitats and has synanthropic tendencies - this is the species that sometimes invades houses. L. platythorax prefers wetter conditions, and is usually the species found in woodland and wet grasslands.

I've also started noticing that the larvae in L. platythorax seem to be more slender than in L. niger. Of course, this is based wholly on my subjective observations, but might be a good indicative field character.

NB: The photomontages are of British specimens2 that show generally typical characteristics. However, both specimens show setae on the propodeum that curve forward, which is not typical. In the Scottish L. platythorax, which were collected in atypical habitat at their most northern known location in the UK, the entire series had curved forward propodeal setae.


1 American L. niger are most likely a different species again, as the images I have seen do not have the dense clypeal pubescence of L. niger, but do not appear to be L. platythorax either.
2 To be honest, I don't think that them being British matters - if anything I find the characteristics of these species to overlap more in the UK than in mainland Europe. However, I know some British myrmecologists who get funny about such things!
Posted by Sifolinia at 12:24

Very nice images. May I use these as part of my ant workshop in Cardiff later this month? I will of course credit you.
All the best
Mike Fox

Sure. I should probably arrange to attend this meeting anyway - I should have arranged this weeks ago!

May I ask what equipment do you use to make such lovely photos?

Erm, I hold my compact digital camera to the eyepiece of my microscope. It's nothing cleverer than that, but it seems to work okay.

This is great info thanks