skip to main | skip to sidebar

This is either Lyell's swift Pelopidas lyelli or a dingy swift P. agna, both referred to as the common swift. Or it's a rice swift Borbo cinnara, but it seems a bit unlikely.

As you can tell, I know nothing about Australian butterflies, other than what I've been able to glean so far from Michael Braby's Butterflies of Australia. This was one of the very few butterflies willing to pose patiently whilst I got close enough to photograph it, but it turns out that I wasn't able to fit in any of the characteristics that might have separated the three species.

One of the things that I didn't notice when taking the photograph was the small mite that appears to be attached to the butterfly's tongue.

This is a new behaviour for me, so perhaps others can fill me in.

We have two different peonies in our garden planted right next to each other; either different species or varieties. The flower buds on one of them is currently covered in black garden ants Lasius niger, which are clearly attending them for some reason. The other peony has no ants - not one - on the flower buds.

I spent some time yesterday watching and photographing the behaviour and still can't explain it. There are no aphids, so it can't be honeydew, and I can't see any obvious extra-floral nectaries. The ants' attentions seem to be focused on the sides of what are probably  sepals but may be developing petals (see photo).

Most of the time when I see ants on plants they are attending homoptera, so the relationship is unlikely to be very beneficial to the plants. This may be one case that is really advantageous to the plant, but I don't see what the ants are getting out of it or why they are only on one of the two plants.

Is this familiar to anyone?

This is further evidence that my large backlog of ant specimens really needs dealing with!

This specimen is clearly Myrmica slovaca, due to the narrow frons, scape and petiole shape. It was previously erroneously regarded as M. salina in Europe, but this was recently resolved by Radchenko and Elmes (2010), who found that it is quite different from true M. salina. Even so, the name may still be subject to some change, as Seifert (2011) suggests that M. curvithorax is the senior synonym. Currently, according to AntWeb, M. slovaca is still considered to be the correct name.

As far as I've been able to find out, M. slovaca was previously recorded only once in France (as M. salina) at Pont-à-Mousson in 2005, which is situated at approximately 6.03° E and was considered to be the western limit of the species range. This would make my collection, at 5°20.055'E, the new western extent of the species' range. Of course, there may now be other records of this species from France and I would be very pleased to receive further information.

You have to wonder though... I collected this in a rather unpromising looking motorway service station. Seifert (2007) notes the species' high tolerance for changes in humidity, temperature and soil salinity. Is it possible that it is being transported by people and its wide tolerance allows it to colonise a variety of sites? It certainly seems incredible that such a distinctive species had never been recorded in France before 2005.
Posted by Sifolinia at 22:44 1 comment:

It's been a long time since I've posted anything (the effect of getting married and renovating a house). I thought that this was worth breaking a three year habit.

By all accounts, Bothriomyrmex species seem to be pretty uncommon, so I'm pleased that the first one I found is the second, not the first, most common in Europe. Bothriomyrmex taxonomy was in a very confusing state, so these specimens previously keyed out as B. menozzii, but thanks to Seifert (2012) the picture is clearer. I can now say with certainty that they are B. corsicus (Seifert could not find B. laticeps type material, but my specimens didn't fit Emery's (1925) description of laticeps anyway, based upon the length of the antennal segments).

The European species of Bothriomyrmex are temporary social parasites of Tapinoma species. It is likely that invading queens of all Bothriomyrmex species kill the host queen, decapitating them with specialised mandibles, after which they become very physogastric (i.e. they swell with eggs).

I didn't collect any B. corsicus queens, but did collect a male. Unfortunately, the male was a bit mangled when it came out of the tube and did not mount very well, so wouldn't make a good photomontage.

These ants were found under a stone in south-facing subalpine grassland near Venanson, in the Alpes-Maritimes, France, not very far from other locations listed by Seifert (2012). What was perhaps most interesting was that the stone also covered a very large colony of Solenopsis fugax. This suggests that the S. fugax may have been stealing brood from the B. corsicus. S. fugax is known to raid Formica (Serviformica) and Lasius nests, and I have found them alongside Camponotus ligniperda, but I wonder whether there are any records of them stealing brood from Bothriomyrmex or any other Dolichoderine ants.
Posted by Sifolinia at 23:15 3 comments:

Last week I was on a canal boat holiday. The highlight of the whole trip (in my mind) was this beetle, Agapanthia villosoviridescens, which was photographed 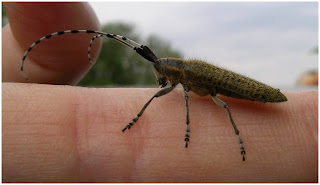 on Claire's finger. It wasn't so much that it is pretty (though it evidently is), it was that when handled it made a very audible squeak.

Closer observation showed that when it squeaked it also moved its pronotum relative to its elytra, suggesting that it produces the sound by flexing the hinge between pronotum and elytra. 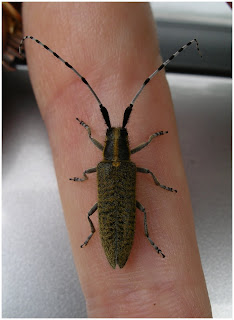 I felt sure that this behaviour would have been observed and reported before, so was surprised when I got home yesterday and looked it up to find no reports. It could simply be that I haven't looked in the right places, but I've tried every possible web search that I can think of and have found nothing. In addition, Andrew Duff's articles on longhorn beetles in British Wildlife fail to make any mention. It seems worthy of a blog simply to report the behaviour.

According to the NBN Gateway, A. villosoviridescens has an odd distribution in the UK, deing restricted to the mid- and eastern-England, but absent from the extreme south or south east. Apparently it used to be considered very rare. It's larvae feed in the stem tissues of thistles and umbellifers.
Posted by Sifolinia at 14:05 9 comments:

Thanks to John Pontin for pointing out the Rickia infested ant in one of this years Wildlife Photographer of the Year competition. I had the portfolio at home, but hadn't noticed the fungus on the ant. It's a bit hard to tell from the online image, but is really quite clear when it's a bit bigger.

I'm thinking that the ant is probably Myrmica rubra. As far as I know, R. wasmannii has not been recorded on this species before. Perhaps the photographer, András Mészáros, would be able to help establish whether I'm right?

I'm starting to think that R. wasmannii is actually quite common in Europe, but just under-recorded. Has anyone else made Rickia sightings?
Posted by Sifolinia at 13:44 5 comments: